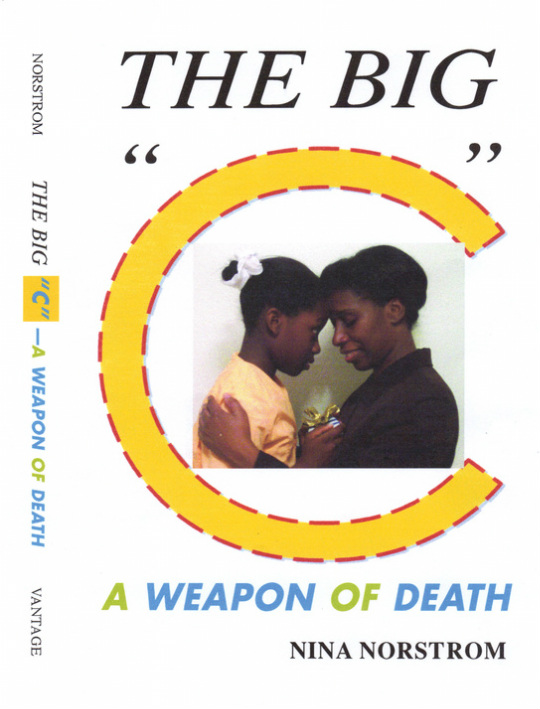 This book tells a personal story about how cancer invaded our family –  physical, emotionally and mentally.  In today’s society, thousands-millions  of people have been afflicted with this horrendous disease.  My daughter  was one of them.  She experienced those “foreign invaders.”  From  birth to eternity, you’ll come to know her, a remarkable and courageous person  who, at age sixteen, had fallen prey to Hodgkin Disease.   Struggling to obtain a law degree, she made it her mission to help others.  She had the drive to win a battle . . . but inevitably, lost the war.  As you’ll learn, her dream to help others will live on through the publication of the book.

What is the working title of your book?
The Big “C”, A Weapon of Death

Where did the idea come from for the book?
Knowingly, we all have a story inside of us.  With each passing day as we live and breathe, we take a journey through life.  It was through this book we’re able to share the ride on life as a teenager, mistress, parent, wife, friend, caregiver and patient while walking our journey.  The relief of it all was
so gratifying.  But the most rewarding piece was using this tool as a vehicle to expose how deadly the disease can cripple a family physically, emotionally and mentally.  Also, the creation of this book would become a venue to help support the fight for a cure ─ by offering to give ACS some of its  proceeds.

What genre does your book fall under?
There are three genres:  Non-fiction, a Biography, and a Memoir.

Which actors would you choose to play your characters in a movie rendition?
I can easily see Angela Bassett staging my character roles; particularly, that young naïve teenager, then the mistress, and that as a nurturing parent and wife . . . .

The young-aged character would be played by Amandla Stenberg.  More than likely, she’d do a bang up job in the principal role as the daughter.

What is the one-sentence synopsis of your book?
Since the story is a multi-level tale, I don’t feel I can break it down into a one sentence structure.

Is your book self-published, published or represented by an agency?
My book was published by Vantage Press. It can be found on
the websites at: http://www.amazon.com; www.barnesandnoble.com; www.booksamillion.com; and www.vantagepress.com

How long did it take you to write the first draft of your manuscript?
Through the journey, I had been keeping a daily journal of our path for years. So when I actually converted it into a manuscript, the first draft was written within six months.  Even then, I allowed it to lie
idle for years afterwards before I considered sharing the story publicly.

What other books or authors would you compare this story to within your genre?
“Cancer Schmancer” by Frans Drescher; and “Cancer Talk” by Selma Schimmel.

Who or What inspired you to write this book?
Writing the story not only provided a venue to move forward in life, but I was able to let go of the pain.

What else about your book might pique the reader’s interest?
Initially, it would be that readers could use our journey as a learning vehicle.  The path traveled maybe the road where others have walked along the way, so THEY too are not alone. Secondly,
just knowing how remarkable someone so young and courageous was ─ in her struggle to overcome this deadly attack.  And lastly, it should grab their interest to know my mind and spirit was totally out there while the story was being written, as evidence from its text.  And perhaps, not the most
polished work at that point.  Oh yes, the sensitive language part.

The Big “C”, A Weapon of Death  Excerpt


A Real Woman: The Seed Is Planted

Nina  Norstrom is my name. I have two sisters, Dana and Lyndia, and three brothers Johnny, Bobby and Tommy. My mom was very religious. You would say she was rather old-fashioned, in the 90s. And you could tell she was very attractive, considered sexy and jazzy in her era. Now my dad was extremely handsome—we knew him only as a womanizer.

When we returned to school, I was going to be a senior. As far as I can remember, many of my summers were spent staying with relatives in the city—we’re a suburbanite family. Whenever we got a chance to go to the big city, it was a thrill. But this year going to the city did not appeal to me. This summer I was going to spend time with my best friend Netti. She and I were excited about her brother’s homecoming. Craig was finally being discharged from the Navy. I’d always thought Craig was very good-looking. He stood 5'10" in height, dark-toned complexion, with brown eyes, stocky build, and packed a smooth rap that would knock a woman off her feet.

Could this journey possibly be YOURS or someone you know?

This works’ creation will be a second novel, and presented in bilingual form titled, Second Edition – A
Bilingual Story, Not a Blueprint/It’s the Shoe Print That Matters  / The Big “C”: A Weapon of Death II.

The Translator assisting with me on this story is:  Carmen Delgado-Cordova, who is a resident of Puerto Rico.  Without her ability to communicate bilingually, with Spanish as her first language, the strength of this work would be lost.

To make it clear, our story is not intended to be a “blueprint” for cancer.  What really counts is the shoe print you make along a journey.  That imprint represents each and every step taken.  And we’ve walked it all, being  a parent–child-teen-friend–mistress–worker–wife–divorcee–lover–patient–and
caregiver!  Ours is a true cycle of milestones.  As I open my heart to share these events, you’ll discover our shoe print leads to:  birth, sickness, death, sorrow, joy and pain.  Its message is
two-folded, while centered on a multi-leveled plateau it unveils: 1) the struggles of a teenage  mom (Nina) who takes on a road of challenges as a parent, person, and friend  . . . venturing to find a stable environment for her daughter (China).  During the search, Nina leaves her shoe print molded in a variety of relationships.  While embracing the roles of being a mistress, lover, friend and even someone’s wife, there is a level of uncertainty if Nina will ever build a foundation.  For sure Nina doesn’t give up trying – pushing until  the end!  And 2) along the way, a tragedy will affect their life when China encounters those “foreign invaders” – Hodgkin Disease.  (As for the reader, the cancer journey of the story doesn’t get exposed until approaching Chapter 9.  Yet, if you feel an urge to go straight there, just dive right in.)  But keep in mind:  we embrace relationships daily.  Just living gives us our “relationship with life.”  Think about it!

While traveling the path to revisit those precious and memorable moments, writing the journey may
have you (the reader-audience) bouncing all over the pages, with no rhyme or reason at hand.  Some
details may make sense while  others may not.  But as the story is being written, there is no telling
where my mind shall wonder.  Just know: it’s a therapeutic journey for coming full circle!  Life
experiences have taught it takes a mound of coping mechanisms:  courage–dedication–strength–love–and a heap of support, to bear the  torch.  For the most part, what I’m going to expose can happen in anyone’s life, as it happened in ours.  Unless you’ve WALKED in the shadow, you may have difficulty understanding and embracing how rocky the roads are.  Remember thou, everyone has a story no
matter where their journey leads.

Since this book has no profanity or over-provocative scenes, it is expected the reader will expand their
imagination (whenever appropriate).  Unlike its original version, The Big “C” A Weapon of Death, this is a clean story.  While reading the story, some readers may find its delivery presented as a
narrative style.   Regardless, how a reader takes in the material just know the events are “REAL.”