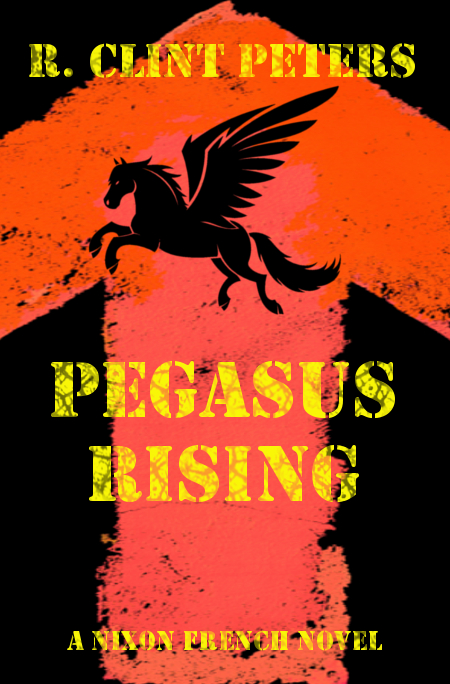 Nixon French, formerly the Chief of Police of Sanctuary City, Idaho, has relocated to Northern Alberta,
to take over the security department of Pegasus-Northwoods Energy Company.  His best friend, Dennis West, has disappeared, possibly into a mud pot in Yellowstone National Park.  His wife, Sandi, has taken her life because Dennis was her brother.

The decision to write came about over a twenty-five year period.  I started with poetry during a long distance romance.  I would write poems when she and I were not together.  Those poems became two books of poetry.

Do you write under a pen name?  If ‘yes’, what is your pen name?
I write under the pen name of R. Clint Peters.  My real name is Ron Peters.

What is the working title of your book?
The book I am working on at the moment is Pegasus Rising, a Nixon French novel.

Do you have other published works?
Yes, I have several books in publication.

Amazon publishes my writer’s help novel, Avoiding Some of the Pitfalls of the First Novel

Who or What inspired you to write this book?
Pegasus Rising, a Nixon French novel, began as an idea for a hook for the first chapter.  The
first chapter is provided as an excerpt in on The Book Reviewers & Authors Club website.  When I
showed the chapter to my private editor, she said, “Ewww.”

What genre does your book fall under?
It has a little mystery, a lot of action, and adventure all intertwined.

Which actors would you choose to play your characters in a movie rendition?
Hmmmmm…..I would like Bruce Willis, Tom Selleck or John Travolta to play in any of my movies.

What is the one or two-sentence synopsis of your book?
Nixon French has been living with the gruesome death of his friend for several years, and has been presented with some details about where his friend died.  Now, he must discover why his friend was murdered.

Is your book self-published, or published and/or represented by an agency?
Pegasus Rising, a Nixon French novel, is on the downhill slope, nearing the finish line.  I have submitted the manuscript based on the editing suggestions of the publisher.  I hope to announce that the novel has been published very soon.

How long did it take you to write the first draft of your manuscript?
I have been working on this novel for more than nine months.  It was started before the rewrite of The Albert Connection, a Ryce Dalton novel (available on Amazon).

What other books or authors would you compare this story to within your genre?
I think my novels might be in the same genre as Tom Clancy or maybe Dan Brown.

What else about your book might pique the reader’s interest?
I work  very hard to make my novels into page-turners, to keep the action flowing.  I also strive to make all details accurate.

Are there any writing-related websites that you have found useful?
The greatest asset I have encountered has been http://bkwritersblock.blogspot.com

Where can we find your work? (Ex:  Website links, blog links, publishers links)

All of my work is available on Amazon, http://www.amazon.com/author/rclintpeters