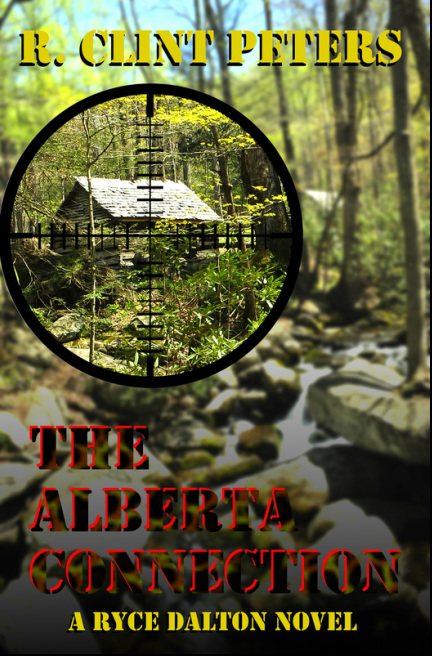 After watching ‘To Hell and Back’, the Audie Murphy Story, for the fifth time when he was eight years old, Ryce Dalton decided he wanted to join the Army. However, when he was fourteen, his goal was to become an Army Ranger.

With only sixteen years as an Army Ranger, Ryce has retired.  Injured in an off-course, low-level practice jump that slammed him into a granite cliff, Ryce has concluded that command opportunities are  nonexistent.

He has joined the Joint Border Task Force, a combined Canadian-American group formed to prevent national secrets leaving the US.  The group has been given the task of finding how four laptops stolen from the Pentagon are crossing the border, and who they are going to be given  to.

Adventure from Page to Page

This book is the first in the Ryce Dalton Series, a page turner almost continuously throughout. Captain
Ryce Dalton, Ret., U.S. Rangers, left the military after fourteen years as a Ranger Company
Commander due to a severe  arm injury he received in the line of duty. With his superior intelligence, there was nothing through his thirty-four years that Ryce couldn’t do.

The plot begins with Ryce secreted in the mountains near the Montana-Alberta border. He has been there eight days spying on a cabin and using as his cover his camping in a nearby forest service camp, where he fishes often enough to feed himself and perfect his cover. At the cabin, finally a black Suburban comes up the road, four men exit the vehicle, wearing forest camouflage with jump harness and side arms. Also carrying M-16 automatic rifles, but Ryce knows they are not military by their
maneuvers toward the cabin and as a result they died from being shot from the cabin plus some hidden explosive discharges.

Ryce was a member of the Joint Border Task Force, initiated shortly after a Royal Mounted Police officer attempted to stop a vehicle outside of Brandon,  Manitoba. The passengers bailed when stopped and only one apprehended. Inside six laptops were found, property of the McDonnell-Douglas Corp. with highly classified information, plus pages of top-secret US Navy documents. This revealed that there was an illegal passage of highly classified material laden  laptops being moved from the US into Canada. The American branch of this task force was to focus on discovering how the items were
transported across the US and across the border.

The story encompasses following one group of thieves carrying four known laptops with US government classified material across the United States to their point of contact with any
Canadians ready to receive the material. If the JBTF was discovered at any time, they would lose the trail and it was more important to discover the source on the US side and the Canadian receivers. The story is filled with many individuals using the latest technological equipment to follow them, always one step behind, without  actually being in sight. Thus Ryce and his co-workers by using these highly developed military tools plus sophisticated computer systems developed by Ryce and close friends who designed them, Ryce and his cohorts were able to track this group across the US from the east
coast into Montana, and then across the border. There was murder, explosive destruction and death, highly skilled opponents and tracking by air and on foot through the  wilderness.

This book is an adventure for men. It begins when Ryce Dalton has taken an observation post position near to a cabin in northern Montana. As he watches, he thinks about his military career, and how he came to be in law enforcement. Then, 4 men approach the cabin, and are brutally murdered by some of an unknown group residing in the cabin. Ryce knows that he is outnumbered, and much too far away from the cabin to intervene, so he does the only thing possible. He quietly leaves his position, and when he is far enough away, he reports his findings. This starts an interstate search for the occupants of the cabin, and a group of stolen laptop computers that are suspected to be in the hands
of these people. With every page of the story the reader finds more information about just how important these laptops are, and also more about the group from the cabin.

R. Clint Peters uses a style reminiscent of a military report, while the reader knows that it is not a report.  Different, private, romantic scenes are included to show how human Ryce is, while the military style allows the author to include an abundance of  facts, from the exact models of
transportation used, to the types of  weapons, and ammunition used by the different groups. He even describes what type of memory card is carried in the digital cameras, as those facts are important for the story. By the end of the book, the reader is finally given a glimpse about how complicated the criminal organization actually is, and while massive coordination is required on the part of the law
enforcement agencies, the multinational, criminal gang thinks that international borders are but a minor inconvenience. This story lets the reader know just how difficult it is to enforce the law, and it ends with a bang just to keep everything  interesting.