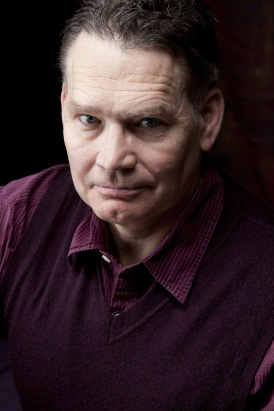 Tom Ukinski was born in an Indian reservation hospital in Tomahawk, Wisconsin. He grew up in Chicago, to which his family moved when he was a child. After receiving a Bachelor’s degree in philosophy, he studied acting improvisation at Chicago’s Second City, and was trained in mime, dance, drama and circus arts.  He did street mime in Boston, Philadelphia, Washington, D.C., and Mexico City, then stand-up comedy in nightclubs in Chicago, Boston and LA.  As a member of a traveling children’s show in the Midwest, he created a popular sketch about an alien encountering a pop-top can of a certain world-renowned cola.

He began writing at 12 with a Jules Verne derivative about men in a balloon.  While riding his thumb from Chicago to Seattle to Los Angeles, and across the Yucatan  Peninsula, he did a lot of journaling,
channeling Kerouac. His first book was Last Job on Earth (1995), which was published by the infamous Northwest Publishing, Inc. Northwest went into bankruptcy while the publisher went to the
slammer.   Twenty-seven years later he gave birth to a giant book called Divine Play: An Epic with Commercials, which was published with iUniverse in 2012.  His writing goal has always been to merge science, mysticism, comedy and surrealism into a grandiose oeuvre.

As a young man he was fortunate to have the guidance of a wonderful instructor who taught him to take into account all of the senses in descriptions, use imagery to portray emotion, maintain consistency of viewpoint and create authentic characters by delineating their thoughts, memories and life experiences as well as depicting their actions.  She also stressed the avoidance of trite phrases and clichés, which diminish the vividness of the narrative.

Copies of Last Job on Earth reside with the author.  Copies of Divine Play are obtainable through the web sites listed above. A few copies of both can be found in the public library.