Devine Play: An Epic with Commercials 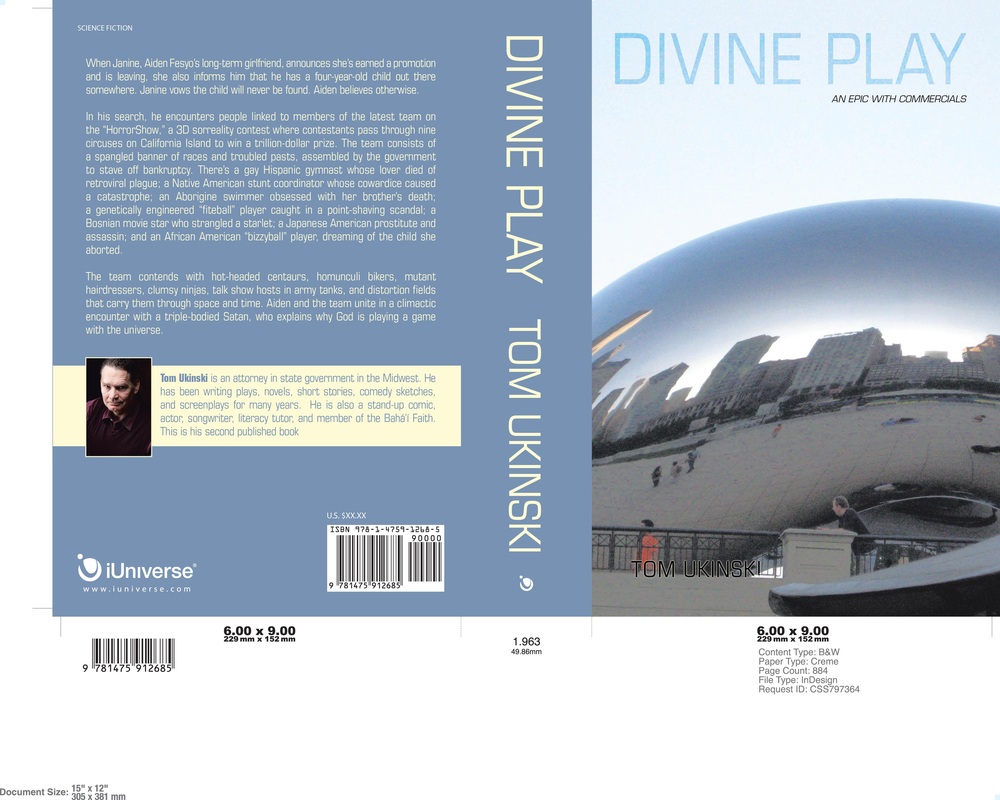 Divine Play begins with Aiden Fesyo discovering he has a four-year-old child…somewhere.  In his quest to find his child, he encounters people personally linked to the seven members of the latest
“HorrorShow” team, who must pass through nine “circuses” on California Island, and defeat the megacorporation, SPORT, to win the trillion-dollar prize.

The team is a spangled banner of races, skills and troubled pasts: a gay Hispanic gymnast, a native-American stunt coordinator, an Aborigine swimmer, a genetically engineered “fiteball quarrelback,” a Bosnian  movie star and entrepreneur, a Japanese-American courtesan and assassin, an African-American “bizzyball” player and terrorist’s daughter. Three are killers; three blame themselves for deaths. One aborted her child. Another watched his lover waste away with retroviruses.

Ultimately, Aiden joins the “HorrorShow” team to confront a gigantic triple-bodied Satan who reveals that the universe is a “divine play” of good-in-evil and evil-in good.

What is the working title of your book?
The final title is Divine Play: An Epic with Commercials.

Where did the idea come from for the book?
Years ago I wrote a radio play that parodied the Olympics and was populated with contenders of various races and ethnic groups. The radio station rejected it because the characters lacked depth.  I
added an enormous amount of depth, but, hopefully retained the satire.  Although many authors casually refer to “Dante’s Inferno” or the “ninth circle of hell,” I went through the Inferno in detail, adopting its methodology of correlating sin with consequence, but modernizing the punishments (and, of course, societal context).

What genre does your book fall under?
Science fiction.

Do you have other published works?
Last Job on Earth (1993).

Which actors would you choose to play your characters in a  movie rendition?
The actors I think of would be too old for the roles.  I suspect the characters would be portrayed primarily by unknowns.

What is the one or two-sentence synopsis of your book?
Divine Play is an exploration into the consciousness of seven contestants in a “sorreality” show based on Dante’s Inferno who represent a spangled banner of races, skills and troubled pasts.   This story is intertwined with that of an everyman searching for a child he never knew existed.

How long did it take you to write the first draft of your manuscript?
Discounting work on other projects and the intrusions of life, fifteen years.

What other books or authors would you compare this story to within your genre?
Philip K. Dick (esp. A Maze of Death and Ubik)
Frank Herbert (Dune)
Brian W. Aldiss (esp. the Helliconia trilogy)
Roger Zelazny (esp. Chronicles of Amber)
Kurt Vonnegut (esp. Slaughterhouse Five and Sirens of Titan).

Who or What inspired you to write this book?

I liked science fiction that created its own vocabulary and incorporated other languages (even artificial ones), portrayed a story from multiple viewpoints (for example, Divine Play has a chapter narrated by the Earth), and went beyond the superficial characterizations in most sci-fi (and most popular fiction).
I wanted to write a humorous “epic” that utilized multiple forms of media (albeit reduced to print), and also combined literature with sports (however bizarre my versions of the sports). Since sci-fi magazine publishers regularly provide lists of topics that they do not want to see, I made sure that I included them with every other that sci-fi category I could think of.

What else about your book might pique the reader’s interest?

The narrative is interspersed with tropes, pastiches, songs, commercials, mini-plays, sound bites, neologisms, wordplay, scriptural parodies, movie promos, maps, charts and satire of everything.
It also includes a vocabulary, index of characters, and 3DTV guide.  It is one of the few novels with  footnotes.

Are there any writing-related websites you have found beneficial in your writing?

I rely primarily on informational websites, especially those devoted to science, medicine and
history.

Where can we find your work? (Ex:  Website links, blog links, publishers links)