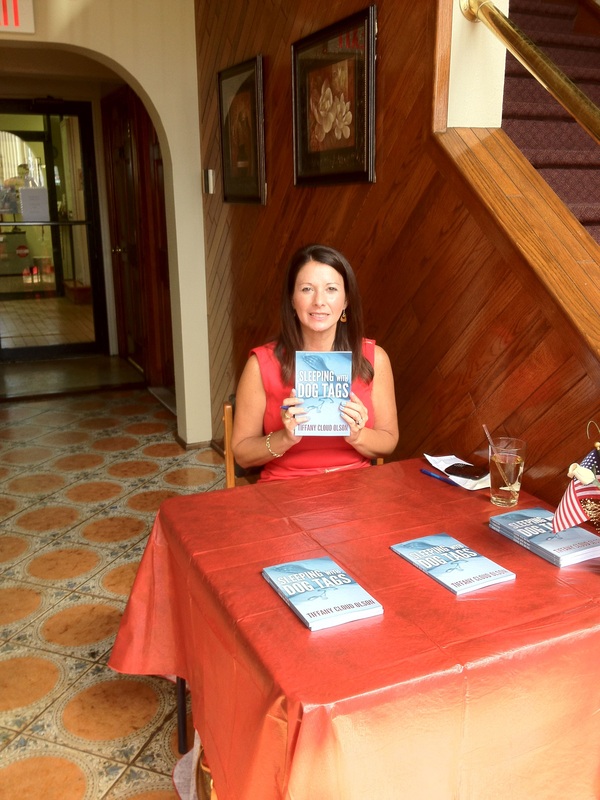 In 2011 while most were going about their normal daily routine, Tiffany Cloud Olson was thinking of her husband, SSG Erik Olson, a decorated Special Operations combat veteran serving outside the wire in eastern Afghanistan’s Hindu Kush near Pakistan. Based upon insurgent activity in the region, a high probability existed that he would be injured or worse. Olson was not naïve to battle, as prior to Afghanistan, he served two year-long tours with Special Operations in Iraq where he was awarded numerous commendations, among them, three bronze stars, including the bronze star for valor. But despite being a seasoned combat veteran, the risks for him were real, and the fears for her, palpable.

Within its first three weeks of availability, Sleeping with Dog Tags hit Amazon.com’s Best Sellers List in the military bio category (#78) & its highest position on the Top 10 Hot New Releases in the same category (#3).

Sleeping with Dog Tags tracks the emotional rollercoaster of a military spouse’s year at home while her husband is deployed in Afghanistan. Central to her narrative is the conviction that while war is hell for the  soldiers, it is also hell for family members manning the home front, and there are few supports for those left behind.

But the story is also a love story. A story about two people meeting later in life after divorces and discovering they are soul mates—despite their very different backgrounds. And it is the wisdom garnered from a life of experiences that feeds a very poignant, yet very self-aware reflection on the challenges of dealing with the ever-present specter of death, the “my way or the highway” nature of the military, and the missteps of a strong woman treading the unchartered path of the military spouse. But, her humor and passion elevate the narrative. This is not a bitter or whiny piece of writing—angry at times, yes, sad too, and funny as well—but her objective is not to complain. Rather, she strives to offer some perspective on her experiences in the hopes that other military spouses will take some courage and confidence from the heartfelt reminiscences of a woman who got really tired of saying “good-bye.”

She does not only wish to raise awareness of the military family experience with this book, she also wishes to raise money for an organization benefiting her community. Cloud Olson intends to donate a portion of the profits from Sleeping with Dog Tags to The Rolling Angels for Armed Forces, a motorcycle  group that supports military and their families in multiple ways—soldier send offs, return home celebrations, presence at military funerals, and gifts for military children during the holidays, among the many things they do. Amy Crego, Founder of The Rolling Angels, authored the book’s foreword.

SSG Olson returned from his Afghanistan tour earlier this year, recipient of the Purple Heart. Over the course of his three tours, Olson suffered six hits in combat. He is currently recovering from injuries at a military base near Washington, D.C. where he is in The Wounded Warrior Program & going through
the WTU process towards medical retirement.