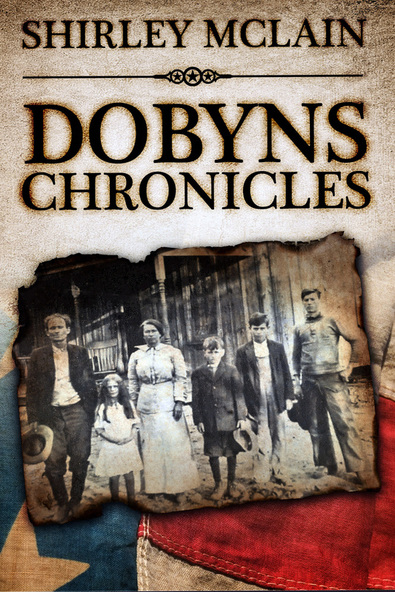 Dobyns Chronicles is a captivating celebration of the life of Charlie Dobyns. His life began in northeast Texas near Bonham, on the Red River. His Cherokee mother and cowboy father strove to survive on their river valley ranch. Tragedy ended this way of life for Charlie in 1888. Follow him through Chickasaw Territory and on to McAlester in eastern Oklahoma.

This is a story of a changing way of life and adaptations made to survive. Charlie's strong passion for life and dignity equipped him for survival as he raised his siblings with, likeability and dignity. It’s a story of loss, misfortune, hard times and heartbreak, but also love, determination, kindness, joy and spirituality.

Dobyns Chronicles: a story of strength, faith and survival

Dobyns Chronicles by Shirley McLain is about her great-grandfather, Charley Dobyns and his life growing up on ranches in Texas and Chickasaw Territory (which is part of present day Oklahoma) in a time when the old ways were moving into the modern era and the old life would only be seen in movies.

The story opens with Charley standing on his land for the last time as he moves from his home. He reflects back to his life on his father’s farm and his early memories of his parents. When his parents died tragically during the yellow fever epidemic of 1888, Charley must figure out how to keep his siblings together and keep them alive. They would endure extreme weather, tragic accidents and situations that no one could possibly imagine and they came back stronger and ready for the next one.

I love this story. I love the perseverance to survive. While I was reading this book, I couldn’t help but think of my grandmother on her parents’ farm in Oklahoma during the Great Depression and the stories she would tell me of what they did to survive. I wonder if today’s generations would have the same survival spirit as out grandparents and great-grandparents. The story was so engrossing that I read the entire book in one day, which I thought I wouldn’t do but I had to finish and what find out the rest of the story. I really enjoyed the family photos at the end of the epilogue. It helped put faces to the names and their incredible story. I loved the Dobyns’ commitment to God and His Word. No matter what was going on in his life, the family always turned to God for guidance and comfort. I highly recommend Dobyns Chronicles. It is a story of love of family, love of the land and survival against great odds.

Dobyns Chronicles’ starts out with a picture of an Indian Territory Map which I especially enjoyed looking at. This story gives the reader a true taste of what life was like in the 1890’s. The setting is in Chickasaw Territory, North East Texas and in Eastern Oklahoma.

Turning the page from this map to chapter one, line one, the reader is struck with “OLD AGE IS hell, but it’s something all of us have to go through” and shortly thereafter another line that reads “You never know what road life will lead you down. Pa told me when I was a little boy, “You just have to take a deep seat and hang on for the ride.” He sure told the truth.”

Vivid story telling with beautiful old lines like “the heavens opened up and let loose with one of those toad soakers” draws the reader into the time period. Truer than life characters that pull at the reader’s heart strings as their lives show the harshness and simplicity of times gone by. Shirley McLain’s characters like Charley have a strong sense of family, friends, community and faith which carries him from youth to being the matriarch of a large family leaving behind an incredible legacy.

Life in the 1890’s is based on survival off the land and animals like the pigs that provided food such as “crackling corn bread out of the fried cracklings”. This story will remind the reader what travel was like in horse draw wagons that took days to complete 85 miles. Days gone by with the children had three sets of clothes, work/pay clothes, school/street clothes and our Sunday best. Old time remedies like mudpacks to keep the mosquitoes off and the use of Indian herbal medicine. A time when death was only an arm’s length away due the circumstances of the times. A story of a young boy who is forced to become a man, a time when wages were $20.00 a month and a time where horses, buggies, trains, trolleys and carpetbags were of importance. Your will read great conversations, family letters and experience home, heart, love and a home birth produces a son that makes one man’s world complete.

Story telling is an art form and Shirley McLain is an artist. If you have any sense of history and/or had grandparents or someone older tell you stories than this book will make your heart skip a beat and your mind to go in places where it hasn’t been in while. This amazing family chronicle brought back memories for me growing up with an older generation that kept me spell bound by their stories. I have often thought as a society we have lost the art of storytelling. Shirley McLain has brought encouragement back to my soul. She did her historical research and has family stories of her own no doubt cleverly woven into this story.

Cold Coffee Press endorses ‘Dobyns Chronicles: A Boy Becomes A Man’ - by Shirley McLain  as an inspiring historical fiction that will send chills up and down your spine, keep you glued to the pages and remind you of an era gone by that must not be forgotten.

Given To Me For An Honest Review

Shirley McLain has written a book that I felt was more of an historical fiction rather than just a fiction. It reads so real and as you read it you feel like you are there also. This is about a young boy whose father was a cowboy and whose mother was Cherokee. His parents have worked very hard on their ranch to raise their children. But tragedy ends Charlie's way of life. He finds that it is up to him to raise his siblings, David and Violet. His passion for dignity and life is what helps him to do so.

This book allows you to follow his life and live the adventures, ups and downs that shaped him into the man that he became and that his family for generations became. It is a book of twists and turns. A rollercoaster of emotions that will make it hard for you to put the book down. I enjoyed reading it very much and gave it 5 stars but wish I could give it more. I highly recommend it to everyone. I look forward to many more books from Shirley McLain.