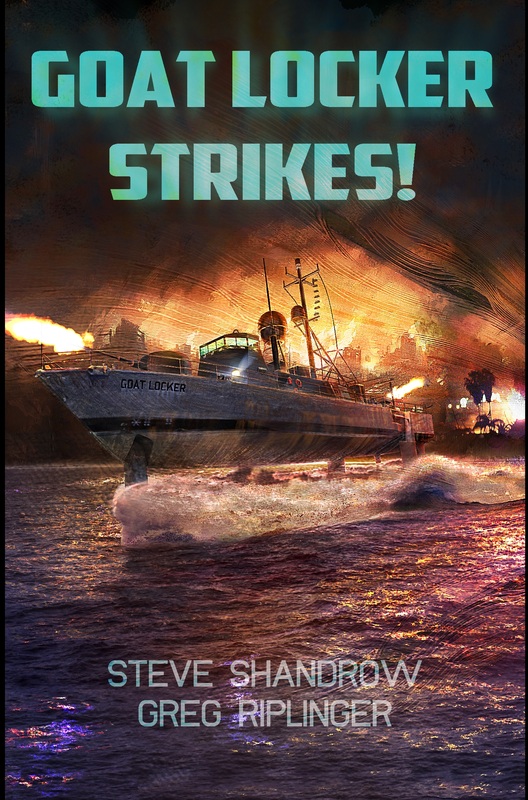 Oceans across the globe are erupting in piracy, drug smuggling, and all out anarchy.  Retired Navy Master Chief Bob Kensey knew all about the unrest, but nothing of dark storm clouds brewing two oceans and thousands of miles away.  His thoughts were on the two Chinook salmon caught earlier, now simmering in the smoker, and beating Gunny, the “Safe Haven” bar’s proprietor out of another cold San Magoo beer.

Life changes for the Chief when a sailing yacht is hijacked off the coast of Somalia and an unannounced visit by a shipmate from the past set wheels in motion that engulfs Chief Kensey, and a hastily recruited crew of irascible old goats on a mission destined to fail.

With years of experience to call upon, and a well-placed government official to help, they undertake a mission that can only be described as the very definition of ‘off-the-grid’.

0831: I was on the fantail watching us get underway. Boats Clark had lines singled up and a security guard on the pier was ready to cast them off from the bollards.  Masters finished his preps and just announced, “Cast off all mooring lines!” over the General Announcing System.

The last line was aboard and our stern slowly swung away from the pier. An agitated security guard
hurried down the pier, wildly waving his arms, yelling to get our attention.

Masters,  standing at the  port bridge window, got on the bullhorn and yelled down to  Boats. “We are
going to moor back up to the pier.” He maneuvered us back alongside.

Boats  scrambled on deck, uttering unflattering platitudes to no one particular but  still in control. “José! Quit skylarking’ and help with this fuckin’  Chinese-Fire-Drill. Get that messenger secured to the mooring line and  heave that monkey-fist on the pier so that guy standin’ by the bollard can pull it
over!”

Once secured to the pier, Boats lowered the brow. The security guard, speaking rapid-fire Spanish,
proceeded aboard before the brow was even secured.

“What’s so urgent?” I asked when he stepped aboard.

“Señor Masters por favor.” He managed to say. He was out of breath and flustered.

I don't  speak Spanish but I knew what he wanted. José was standing by the aft line. I motioned for him to come over and translate. Masters was already on his way down from the bridge. In a few seconds, Masters was standing conversing with the security guard.

The conversation was short and to the point even though its content was Greek to me  . . .

Masters turned to me and said, “Looks like we are going to have company. Our radar picked up several small craft from the mainland heading this way. Our coastal watch seems to think this flotilla belongs to Don Carlos. They are moving too fast for fisherman or charter boats. He said there has been an increase in radio chatter since we arrived. I think this might be a good time to  either shit-and-git or stay and fight. If it were up to me Kensey, I would get the hell out of here and swing north, run for a few miles, head east  and hit them on the flank... only going to take one or two hits from the 76mm to discourage them.”

I mulled everything over and said, “What if they are not armed? Do we have any proof they are
druggies? Could they possibly be Mexican Coastal Authorities?”

“Not a chance. Mexico doesn't have an effective coast guard and certainly not down here. If they
were official, our coast watchers would have recognized the boats. It won't take much to find out if they are armed. Let’s make a high-speed pass and see if they shoot at us. If they do you and Preacher can take them out. Jorge and Manuel need training and Preacher loves to shoot.” He said with a
laugh.

I came to a quick decision,  “Masters we need to deal with this situation but we need to know if they
are armed and hostile before we blow them out of the water. At any rate, we need to decide before we rendezvous with  Scrap Dealer. We can’t have armed boats harassing us during the loading operation. No need for stealth. They know we are here. We should see them on radar when you round the northern end of  the Island. We’ll plot a CPA, (Closest Point of Approach), of about 300 yards and see what they do. I’ll take care of CIC. You  and Boats can handle the bridge; José can translate for Preacher. Let’s get underway as  fast as possible. If they are hostile we’ll introduce them to Davy
Jones.”

“Thanks! General quarters and get this ship underway. All in a day’s work I guess!” He said and quickly returned to the bridge.

“Life was so much easier two weeks ago . . . How the fuck did I get here?” flashed through my
mind.

Two weeks ago, I was a retired Master Chief and retired Boeing engineer sipping a cold beer listening  to the Beatles on an old jukebox belt out “It’s a Hard Day’s Night.” I was wishing for a little excitement. .

What is the working title of your book?
Goat Locker Strikes!

Where did the idea come from for the book?
Good question. I am a retired Navy Chief Petty Officer. Retired in 1985. I listen to the news and the
piracy in Somalia is very disturbing. I felt like I could do something about it, and out of those thoughts came the book.

What genre does your book fall under?
Action adventure.

Which actors would you choose to play your characters in a movie rendition?
While writing the book that question popped into my head several
times. Here goes: \
Preacher played by Morgan Freeman.
Greasey  played by Earnest Borgnine. I know he is deceased but someone like him.
Kensey played by George Clooney
Masters played by Richard Gere.
Boats played by Ed Harris
Sparks played by Gary Oldman
Fritz played by Hugh Laurie

What is the one-sentence synopsis of your book?
Retired Navy Chiefs are recruited to carry out a dangerous, under the radar, mission for the
government.

Is your book self-published, published or represented by an agency?
Self-published with Bookstandpublishing.com

How long did it take you to write the first draft of your manuscript?
About six months.

What other books or authors would you compare this story to within your genre?
Tom Clancy, Dale Brown. “Magnificent Seven” for the retired set.

Who or What inspired you to write this book?
My great Aunt Millie was a published author. She always encouraged me to write. I thought I had
something to say. With the help of my coauthor, Greg E. Riplinger, we said it in a damn good book.

What else about your book might pique the reader’s interest?
This book is actually plausible and believable. It pays homage to veterans and retired sailors, as well as retirees in general. Just because we retired, doesn’t mean we can’t do the job.

Where can we find your work? (Ex:  Website links, blog links, publishers links)
Bookstandpublishing.com, barnesandnoble.com, and amazon.com. Also, you can go to Goatlockerstrikes.com and follow the links.